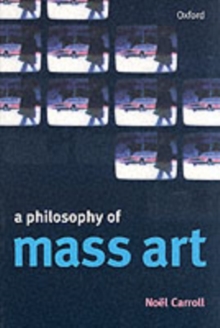 We live in a world dominated by mass art. Movies, TV, pulp literature, comics, rock music - both broadcast and recorded - surround us everywhere in the industrialized world and beyond.

However, despite the fact that for the majority mass art supplies the primary source of aesthetic experience, the area has been neglected entirely by analytic philosophers of art. In A Philosophy of Mass Art, Noel Carroll, a leading figure in the field of aesthetic philosophy, attempts to address this lacuna.

He shows why philosophers have previously resisted and/or misunderstood mass art and he develops frameworks for understanding the relation of mass art to the emotions, morality, and ideology; discussing the accounts of such theorists in the field as Collingwood, Adorno, Benjamin, McCluhan, and Fiske.

Mixing conceptual analysis with many vivid examples, the author proposes the first significant attempt at a philosophy of mass art in the analytical tradition, concluding there are strong grounds for approaching mass art in the same fashion as high art.