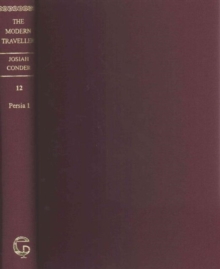 Published by Eureka Press, Tokyo, and distributed outside Japan by Routledge. This is the second part of a new facsimile series which reprints The Modern Traveller, originally published in 30 volumes between 1825 and 1829. --Edited by Josiah Conder, known as the editor of journals like The Eclectic Review or The Patriot, The Modern Traveller was a successful series of travel books published just prior to Britain's transport revolution which saw the development and rapid expansion of roads and railways. --Reflecting Britain's imperial ambitions and the expansion of its Empire around the globe, the series had global range, including coverage of the Middle East, Africa, North & South America, and Asia.

It provided general readers with the latest information on each country's geography, history, political situation, culture, customs, major cities, travel routes along historic sites, scenic spots, and so on. --Each volume contains illustrations and foldout maps which are all faithfully reproduced in the reprint. -- The second part of the series is from the seventh volume to the thirteenth: the four volumes from the seventh to the tenth are for India; the eleventh for Burma, Siam, and Anam; the twelfth and the former part of the thirteenth for Persia; and the latter part of the thirteenth for China. -- Including very interesting description and views of Britain to the Asia in early 19th century, those volumes are valuable source for any researchers on the history of relationship between Britain and Asian countries. Extract from the New Introduction to the 1st part by Noriyuki Harada--- Publishing in the early nineteenth century greatly influences scientific reasoning and dissemination of knowledge.

The Modern Traveller: A Description, Geographical, Historical, and Topographical of the Various Countries of the Globe, now reprinted and published by Eureka Press in Japan, can be regarded as one of the most influential volumes of this type of publication.

It was originally serialized from 1825 to 1829 and was finally compiled and published by James Duncan, a London publisher, in 1830 as the whole set of thirty volumes on which this reprint edition is based.

The text of the 1830 edition is almost the same as that of the first serialized publication except for some corrections by the editor himself; the original maps as well as illustrations, too, are improved in the 1830 edition.

This Eureka Press edition magnifies the 1830 edition twenty per cent for the reader's convenience.--- --- How can we now evaluate the whole set of thirty volumes of The Modern Traveller?

Conder's close examination of early nineteenth-century travel books is of course replaced and updated by more modern "Geographical, Historical, and Topographical" research; as for maps and illustrations, too, we can use more accurate and convenient means.

Although the unity of geographical, historical and topographical description is still useful and valuable, better versions are available for the modern reader.

It may be that the excellent unity of The Modern Traveller itself requires a revision after nineteenth- and twentieth-century colonialism, imperialism, Darwinism, and sceptical thoughts on the advancement of knowledge. However, we should not forget that Conder's editorial process clearly shows the way to understand the world and the energy his contemporaries held in general.

Being well aware of academic advancement in geography, he strenuously accumulated information and knowledge, and examined them closely.

This accumulation of information and knowledge can be widely observed in many academic and scientific disciplines from the late eighteenth century; successive publication of dictionaries of various genres, encyclopaedias like Encyclopaeedia Britannica (first published from 1768 to 1771), and numerous literary anthologies clearly illustrates the tendency.

As mentioned above, the adjective "Modern" seems to have Conder's special connotation of his academic and scientific interest, but the whole set of thirty volumes of The Modern Traveller tells the energy of early nineteenth-century people who were eager to understand the modern world. And needless to say, this energy directed the world to the nineteenth- and twentieth-century situation that we know well in the history of modern international relations.

As a reprint edition, this Eureka Press version of The Modern Traveller maintains the energy as well as remaining faithful to the original and keeping its form intact. Half a century after the publication of The Modern Traveller, Conder's grandson, Josiah Conder the younger (1852-1920), came to that country of Japan to which his grandfather had not given a volume of description in the edition, and made a large contribution to Japanese modern architecture.

Some of the buildings he designed and those by the Japanese architects of a younger generation he educated are extant and fully utilized for the original purpose.

In a sense, The Modern Traveller still continues travelling and the footsteps reveal the essence of the modernization of the world on which we should lay the foundation of our thoughts about its future.