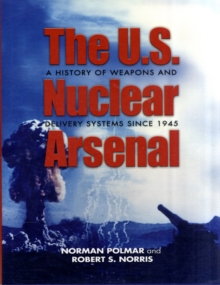 The U.S. Nuclear Arsenal : A History of Weapons and Delivery Systems Since 1945 Hardback

The atomic bomb ended the war against Japan in 1945 and became the centerpiece of U.S. and Soviet military strategy for the next 45 years. In the late 1940s the debate over whether the atomic bomb was the ultimate arbitrator of international differences led to the infamous carrier-versus-B-36 controversy in American defense policy; American school children in the 1950s practised "duck and cover" as they feared an atomic attack against American cities; and billions were spent to develop and procure vast fleets of B-36, B-47, and B-52 nuclear bombers, that led to a still-alive legacy that is seen in the current B-1 and the B-2 stealth bomber controversies.

At the battlefield level the U.S. Army developed the 280-mm atomic cannon, atomic demolitions, and the infamous Davy Crockett atomic"grenade" launcher--the last intended to give battalion commanders their own nuclear arsenal. Similarly, the U.S. Navy entered the atomic world to obtain a carrier-based nuclear strike capability, to compete with the U.S.

Air Force. Subsequently, a vast variety of naval weapons were developed. The U.S. nuclear arsenal peaked at some 31,500 warheads in the mid-1960s, and this book describes the development of all U.S. nuclear weaponry, from the bombs and warheads, and the missiles, rockets, and planes that could deliver them. About the AuthorNorman Polmar is the author of Strategic Weapons: An Introduction (1975), served on the Secretary of the Navy's Research Advisory Committee (NRAC) for almost ten years and in 2007 was named chairman of the Department of Homeland Security's Science and Technology Advisory Committee.