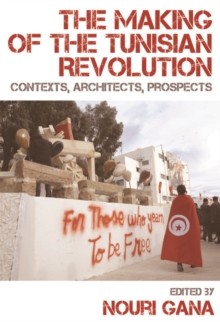 This is a full history of the Tunisian revolution, from its roots decades ago to the ongoing process of becoming a democracy.

From late 2010 to the present day, the Arab world has been shot through with insurrection and revolt.

As a result, Tunisia is now seen as the unlikely birthplace and exemplar of the process of democratisation long overdue in the Arab world.

Mixing political, historical, economic, social and cultural analyses and approaches, these essays reflection the local, regional and transnational dynamics together with the long- and short-term factors that, when combined, set in motion the Tunisian revolution and the Arab uprisings.

Above all, the book maps the intertwined genealogies of cultural dissent that contributed to the mobilisation of protesters and sustained the protests between 17th December 2010 and 14th January 2011, and beyond.

It features 13 essays by an international and interdisciplinary set of experienced and emerging scholars who are active in researching and writing about the Tunisian and Arab Spring revolutions. It maps the origins of the Tunisian revolution, seeing it as an event that was years in the making after decades of 'collaborative revolutionism' across spaces, places and generations.

It explores the various traditions of dissent under Bourguiba and Ben Ali.

It includes important reflections on the major debates that dominated the post-revolutionary scene and continue to inform the transition to democracy.