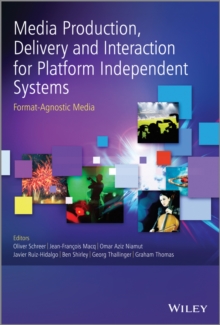 The book will give an insight into current trends and developments of future media production, delivery and reproduction.

Consideration of the complete production, processing and distribution chain will allow for a full picture to be presented to the reader.

Production developments covered will include integrated workflows developed by researchers and industry practitioners as well as capture of ultra-high resolution panoramic video and 3D object based audio across a range of programme genres.

Distribution developments will include script based format agnostic network delivery to a full range of devices from large scale public panoramic displays with wavefield synthesis and ambisonic audio reproduction to small screen mobile devices. Key developments at the consumer end of the chain apply to both passive and interactive viewing modes and will incorporate user interfaces such as gesture recognition and second screen devices to allow manipulation of the audio visual content. * Presents current trends and potential future developments by leading researchers in immersive media production, delivery, rendering and interaction. * Considers the complete production, processing and distribution chain illustrating the dependencies and the relationship between different components. * Proposes that a format-agnostic approach to the production and delivery of broadcast programmes will overcome the problems faced with the steadily growing number of production and delivery formats. * Explains the fundamentals of media production in addition to the complete production chain, beyond current-state-of-the-art through to presenting novel approaches and technologies for future media production. * Focuses on the technologies that will allow for the realization of an E2E media platform that supports flexible content representations and interactivity for users. An essential read for Researchers and developers of audio-visual technology in industry and academia, such as engineers in broadcast technology companies and students working toward a career in the rapidly changing area of broadcast both from a production and an engineering perspective.