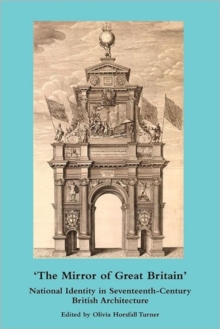 The Mirror of Great Britain Hardback

In studies of seventeenth-century British architecture, Britain has, more often than not, been a synonym for England, yet the geographical and political reality was far more complex.

In this book, based on a Society of Architectural Historians of Great Britain symposium, emerging and established scholars examine the multi-faceted national identity of architecture across the British archipelago and the Atlantic world.

They examine how different architectural forms and features were employed to express political and social realities and aspirations.

Ten rich and varied essays encompass Sir James Murray, the Kings Master of Works in Scotland; the fortification of Bermuda; plantation architecture in Ireland; country house design in Wales; architectural style on a Northern Irish estate; Scottish country house and vernacular architecture; the architectural lessons of the Levant; and the gentleman's house on the other side of the Atlantic.