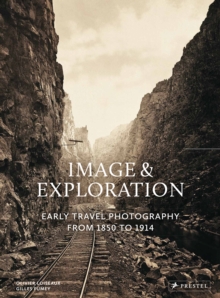 Image and Exploration: Early Travel Photography from 1850 to 1914 Hardback

In the second half of the 19th century, unprecedented advances in technology resulted in the collision of travel and photography.

Explorers were able to document their journeys, hauling enormous amounts of equipment over arduous terrain.

The results were breathtaking. This collection of photographs takes readers on a historic global tour that includes five continents and offers a visible record of worlds long-since vanished.

Beginning in North Africa amid the pyramids and along the Nile, this book takes readers down through the Sahara to South Africa via Cameroon, Ethiopia, and Zanzibar.

The journey continues from South to North America, capturing images of the tribes near Cape Horn in Patagonia, an expedition down the Amazon River, the Panama Canal, Yellowstone Park, trains in New York City, and the Inuit tribes of Canada.

The journey across Europe goes from Cologne Cathedral, over the Alps, down to Naples, via the Balkans through to the Ottoman Empire.

The book concludes with images from Persia to Mongolia, along with apan, India, Java, and ending in Australia.

The 230 mostly duotone images include the works of William Henry Jackson, Felice Beato, Timothy O'Sullivan, Linnaeus Tripe, Samuel Bourne, and many others.

Accompanied by expert commentary, these images shed invaluable light on the ways Western societies confronted and reimagined the world beyond their borders.