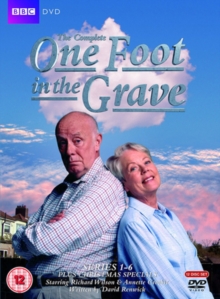 One Foot in the Grave: Complete Series 1-6 DVD

Every episode from all six series of the TV comedy starring Richard Wilson as Victor Meldrew, the archetypal grumpy old man, who has been forced into early retirement and is perpetually enraged by seemingly every aspect of modern life.

Series 1 episodes are: 'Alive and Buried', 'The Big Sleep', 'The Valley of Fear', 'I'll Retire to Bedlam', 'The Eternal Quadrangle' and 'The Return of the Speckled Band'.

Series 2 episodes are: 'In Luton Airport No-One Can Hear You Scream', 'We Have Put Her Living in the Tomb', 'Dramatic Fever', 'Who Will Buy?', 'Love and Death' and 'Timeless Time'.

Series 3 episodes are: 'Monday Morning Will Be Fine', 'Dreamland', 'The Broken Reflection', 'The Beast in the Cage', 'Beware the Trickster On the Roof' and 'The Worst Horror of All'.

Series 4 episodes are: 'The Pit and the Pendulum', 'Descent Into the Maelstrom', 'Hearts of Darkness', 'Warm Champagne', 'The Trail' and 'Secret of the Seven Sorcerers'.

Series 5 episodes are: 'The Man Who Blew Away', 'Only a Story', 'The Affair of the Hollow Lady', 'Rearranging the Dust', 'Hole in the Sky' and 'The Exterminating Angel'.

Series 6 episodes are: 'The Executioner's Song', 'Tales of Terror', 'The Futility of the Fly', 'Threatening Weather', 'The Dawn of Man' and 'Things Aren't Simple Any More'.