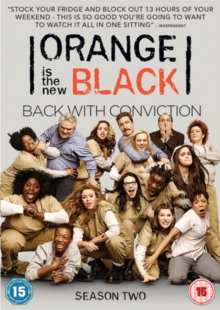 All 13 episodes from the second season of the Netflix comedy drama adapted from Piper Kerman's memoir about her time spent in a women's prison.

Piper is now serving a 15-month sentence as a result.

In this season, Piper receives some unsettling news from her fiancé Larry Bloom (Jason Biggs), while Alex finds herself living in fear when she is released from prison after testifying against her former drug boss.

The episodes are: 'Thirsty Bird', 'Looks Blue, Tastes Red', 'Hugs Can Be Deceiving', 'A Whole Other Hole', 'Low Self Esteem City', 'You Also Have a Pizza', 'Comic Sans', 'Appropriately Sized Pots', '40 Oz of Furlough', 'Little Mustachioed S**t', 'Take a Break from Your Values', 'It Was the Change' and 'We Have Manners.