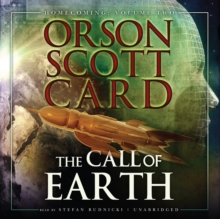 The Call of Earth eAudiobook MP3

For millennia, the planet Harmony has been protected by the Oversoul, an artificial intelligence programmed to prevent thoughts of war and conquest from threatening the fragile remnant of Earth's peoples. But as the Oversoul's systems have begun to fail, a great warrior has arisen to challenge its bans. Using forbidden technology, the ambitious and ruthless General Moozh has won control of an army and is aiming it at the city of Basilica.

Basilica remains in turmoil. Wetchik and his sons are not strong enough to stop an army. As Lady Rasa, through whom the Oversoul speaks, attempts to defeat Moozh through intrigue, Naifeh and his family prepare to voyage to the stars in search of the planet called Earth.