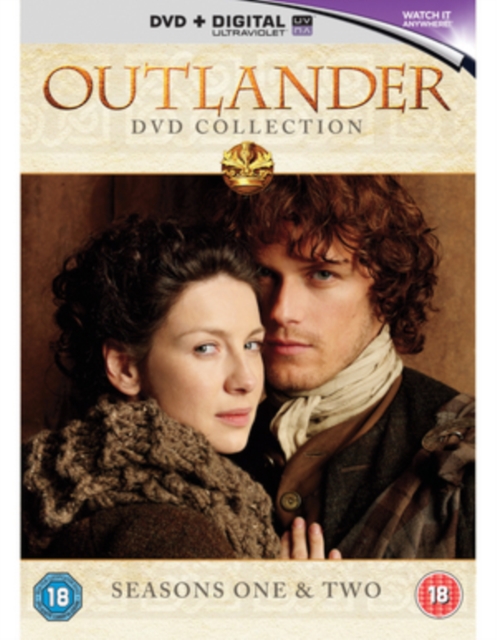 All the episodes from the first and second series of the British-American drama series based on the novels by Diana Gabaldon.

English nurse Claire Randall (Caitriona Balfe) is on a second honeymoon with her devoted husband Frank (Tobias Menzies) after both performing their duties during the Second World War.

On a visit to a stone circle at Craigh Na Dun near Inverness, Claire touches one of the stones and finds herself transported back in time to 1743 where she encounters Frank's ancestor Black Jack Randall (also played by Menzies) who, apart from appearance, is nothing like her loving husband.

When she is rescued from the evil clutches of Black Jack by a gang of Scottish rebels, she finds herself under suspicion of being an English spy.

In the second series, Claire returns to her own time after living in the 1740s for two years.

As she attempts to explain to her husband Frank where she has been, the story flashes back to when Claire and her 18th century husband Jamie (Sam Heughan) travel to France to try to change the course of history.

With Claire's knowledge of future events and Jamie's contacts in France, the determined couple set about trying to prevent the Jacobite risings and, ultimately, the Battle of Culloden.

The episodes are: 'Through a Glass, Darkly', 'Not in Scotland Anymore', 'Useful Occupations and Deceptions', 'La Dame Blanche', 'Untimely Resurrection', 'Best Laid Schemes...', 'Faith', 'The Fox's Lair', 'Je Suis Prest', 'Prestonpans', 'Vengeance Is Mine', 'The Hail Mary' and 'Dragonfly in Amber'.