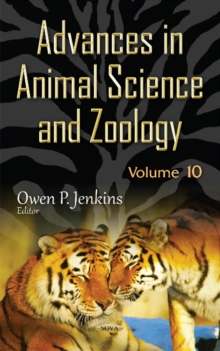 Chapter One reviews the ninety year period from 1925 to 2015 of working on cingulates cytogenetics, showing the importance of chromosomal analysis for the systematic identification of species and in making decisions about reproductive crosses in captive animals.

In Chapter Two, the authors present an overview of the biology, economic impact, behaviour, major outbreaks and possible prediction of attacks by the Moroccan locust Dociostaurus maroccanus (Thunberg).

The mating strategy of the male desert locust Schistocerca gregaria depends on its capacity to increase their fitness.

Chapter Three analyses the choice made by the male when it has the possibility to choose between a mated or a non-mated female.

Wolbachia is the most commonly occurring endosymbiotic bacteria in insects.

Wolbachia selfishly manipulate the reproduction of hosts, resulting in cytoplasmic incompatibility between infected sperm and uninfected egg, and the death of male offspring by infected females.

Chapter Five provides a brief description of the biological features of the gypsy moth and the current methods of its control.

In South America, the six-banded armadillo is constantly exploited as a source of food, even if biomedical research highlights its importance as natural reservoir hosts for the bacterium that causes leprosy (Mycobacterium leprae).

Chapter Six covers the current knowledge on the reproductive aspects of the species, both for male and female, and to point some perspective of studies on assisted reproduction focused on its conservation or multiplication.

Chapter Seven describes the anatomy of eight internal organs of the bottlenose dolphin (Tursiops truncatus) and process them through plastination technique, characterising and pondering the generation of useful structures for different purposes in field dolphins' anatomy.

Chapter Nine summarises the main records obtained on the richness and ecology of species and communities of molluscs already recorded in marine ecosystems off the coast of Ceara in the central region of the semiarid coast of north-eastern Brazil.

Chapter Ten covers the existing literature on the morphology, pathology, distribution, diagnosis and control of gastrointestinal nematodes that cause fatal health problems.