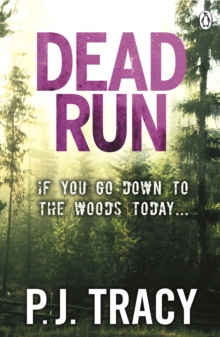 Dead Run is the third book in P.J. Tracy's bestselling Twin Cities series. It should have been a simple journey - a drive from Minneapolis to Green Bay, Wisconsin. But a couple of unplanned detours lead Grace MacBride, Annie Belinsky and police Deputy Sharon Mueller deep in the northern woods, far from civilization and a mobile phone signal. Then the car breaks down. The nervous search for a landline and a mechanic leads the women to Four Corners, a sleepy crossroads town. And place they soon wish they'd never stumbled on - because something terrible happened in Four Corners... Filled with the same crackling dialogue, pace and rich vivid characters as in previous novels, Dead Run firmly establishes P.J.

Tracy as one of the most exciting thriller writers in the world.

Fans of Karen Rose should be paying attention. Follow the characters' journeys in the rest of the series: Want to Play?, Live Bait, Snow Blind, Play to Kill and Two Evils.

Tracy is about to become a household name' Daily MirrorP.J.