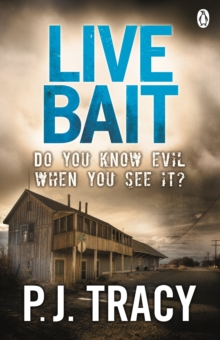 Live Bait is the second book in P.J. Tracy's bestselling Twin Cities series. When elderly Morey Gilbert is found, lying dead in the grass by his wife, Lily, it's a tragedy, but it shouldn't have been a shock - old people die.

But when she finds a bullet hole in his skull, the blood washed away by heavy rain, sadness turns to fear.

It looks like an execution... Soon a whole city is fearful as new victims are found, killed with the same cold precision.

Tracy's Live Bait, the follow-up to debut Want to Play? Fans of Karen Rose should be paying attention. Follow the characters' journeys in the rest of the series: Want to Play?, Dead Run, Snow Blind, Play to Kill and Two Evils.