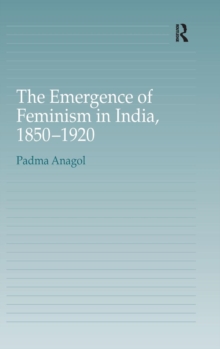 Grounded in a variety of rich and diverse source materials such as periodicals meant for women and edited by women, song and cookbooks, book reviews and court records, the author of this pioneering study mobilises claims for the existence of an Indian feminism in the nineteenth century.

Anagol traces the ways in which Indian women engaged with the power structures-both colonialist and patriarchical-which sought to define them. Through her analysis of Indian male reactions to movements of assertion by women, Anagol shows that the development of feminist consciousness in India from the late nineteenth century to the coming of Gandhi was not one of uninterrupted unilinear progression.

The book illustrates the ways in which such movements were based upon a consciousness of the inequalities in gender relations and highlights the determination of an emerging female intelligentsia to remedy it. The author's innovative study of women and crime challenges the notion of passivity by uncovering instances of individual resistance in the domestic sphere.

Her study of women's perspectives and participation in the Age of Consent Bill debates clearly demonstrates how the rebellion of wives and their assertion in the colonial courts had resulted in male reaction to reform rather than the current historiographical claims that it was a response purely to threats posed by 'colonial masculinity'.

Anagol's investigation of the growth of the women's press, their writings and participation in the wider vernacular press highlights the relationship between symbolic or 'hidden' resistance and open assertion by women.