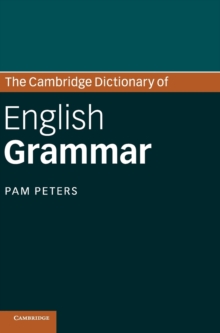 The most up-to-date A-Z resource available for English grammar, this dictionary provides concise, practical definitions and explanations of hundreds of terms.

Each term includes examples and cross references to related concepts.

All the currently accepted terms of grammar are included, as well as older, traditional names, controversial new coinages, and items from the study of other languages.

The dictionary pinpoints differences in the use of the same terminology, such as 'adjunct', 'complement', 'verb phrase', as well as alternative terms used for much the same concept, such as 'noun phrase', 'nominal group'; 'agentless passive', 'short passive'.

It provides a wealth of examples, as well as notes on the relative frequencies of grammatical alternatives, such as 'will' and 'shall'.

It also draws attention to some of the differences between spoken and written English grammar.