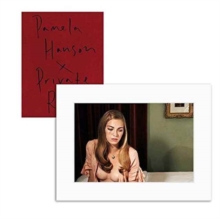 Private Room is a series of photographs of eight different women who Pamela Hanson photographed between 2012 and 2014 at Lafayette House, a small hotel in New York City.

Beginning when she photographed Camille Rowe in 2012, the photographs in Private Room progressed into a series of nudes and semi-nudes.

Although it began as a personal project, soon after starting Hanson wanted to develop it into a book. Hanson was inspired to shoot in the Lafayette House because of its European feeling. A brownstone built in the 19th century, the hotel is a place of forgotten beauty, with walls lined in gold-leafed wallpaper.

Something not seen much in today's modern New York, it is charming, sexy, romantic, and private.

Women photographed by a woman: the intimate and feminine environment captures the essence of each subject. Hanson collaborated with stylist Susan Winget, and together they cast each woman for her individual beauty and personality.