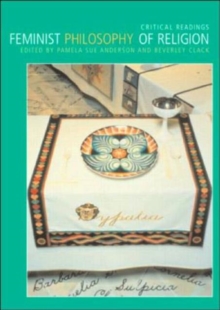 Feminist philosophy of religion has developed in recent years because of the exposure of explicit sexism in much traditional philosophical thinking about religion.

The struggle with a discipline shaped almost exclusively by men has led feminist philosophers to redress the problematic biases of gender, race, class and sexual orientation in the traditional subject. Feminist Philosophy of Religion: Critical Readings brings together key new writings in this growing field.

Part one of the reader explores important approaches to the feminist philosophy of religion, including psychoanalytic, poststructualist, postmetaphysical and epistemological frameworks.

Supported by explanatory prefaces and an extensive bibliography, Feminist Philosophy of Religion: Critical Readings is an important resource for this new area of study.