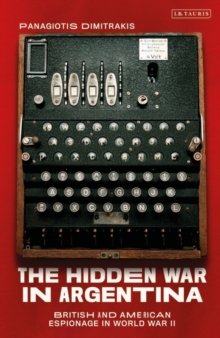 Though officially neutral until March 1945, Buenos Aires played a key role during World War II as a base for the South American intelligence operations of the major powers.

The Hidden War in Argentina reveals the stories of the spymasters, British, Americans and Germans who plotted against each other throughout the Second World War in Argentina.

In Buenos Aires, Johannes Siegfried Becker - codename 'Sargo' - was the man responsible for organizing most of the Nazi intelligence gathering in Latin America and the leader of 'Operation Bolivar', which sought to bring South America into the war on the side of the Axis powers.

After the attack on Pearl Harbor the US state department pressured every South American country to join it in declaring war on Germany, and J Edgar Hoover authorized huge investments in South American intelligence operations.

Argentina continued to refuse to join the conflict, triggering a US embargo that squeezed the country's economy to breaking point.

Buenos Aires continued to be a hub for espionage even as the war in Europe was ending - hundreds of high-ranking Nazi exiles sought refuge there. This book is based on newly declassified files and details of the operations of MI6, the Abwehr, the Sicherheitsdienst (SD) and the FBI, as well as the OSS and the SOE.

Most significantly, The Hidden War in Argentina reveals for the first time the coups of Britain's MI6 in South America.