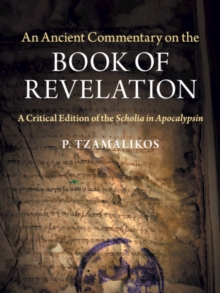 An Ancient Commentary on the Book of Revelation : A Critical Edition of the Scholia in Apocalypsin Paperback / softback

This is a new critical edition, with translation and commentary, of the Scholia in Apocalypsin, which were falsely attributed to Origen a century ago.

They include extensive sections from Didymus the Blind's lost Commentary on the Apocalypse (fourth century) and therefore counter the current belief that Oecumenius' commentary (sixth century) was the most ancient.

Professor Tzamalikos argues that their author was in fact Cassian the Sabaite, an erudite monk and abbot at the monastery of Sabas, the Great Laura, in Palestine.

He was different from the alleged Latin author John Cassian, placed a century or so before the real Cassian.

The Scholia attest to the tension between the imperial Christian orthodoxy of the sixth century and certain monastic circles, who drew freely on Hellenic ideas and on alleged 'heretics'.

They show that, during that period, Hellenism was a vigorous force inspiring not only pagan intellectuals, but also influential Christian quarters.