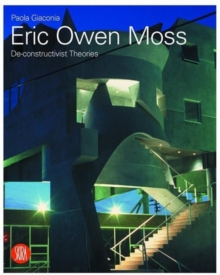 A richly-illustrated monograph on recent works of the award-winning architect.

The work of Eric Owen Moss is an intriguing mix between a sort of Los Angeles critical regionalism (most of his production is in Culver City - Los Angeles) and the highest level of formal and spatial experimentation.

Considered one of the most interesting and innovative North American architects today, he is best known for reinventing spaces for commercial uses and performing arts facilities, breathing new life into a marginal area in the celebrated sequence of buildings in Culver City's Hayden Tract.

Over the last decade Eric Owen Moss has built his critical fortune producing a series of masterpieces which represent one of the most advanced elaborations of the de-constructivist theories of the 1990s.

Paola Giaconia essay introduces the themes of Moss's work including geometry and manipulation, typological and spatial features, wall as design element and uncertainty of the contemporary condition.

The book features an array of his works in over 250 illustrations including the Wedgewood Holly Complex, the Beehive and the Box.

Also included is an interview with the architect and a bio-bibliography. Eric Owen Moss opened his office in Los Angeles in 1973.

In addition to practicing, he has held professorial chairs at Yale, Harvard, and appointments in Copenhagen and Vienna, in addition to Sci-Arc, where he is on the Board of Directors.

He has received numerous awards for his work, including the Award in Architecture from the American Academy of Arts and Letters in 1999, and the Gold Metal from the Los Angeles Chapter of the American Institute of Architects in 2001.

His work has been widely exhibited, most recently in the Russian Pavilion at the 2002 Venice Biennale.