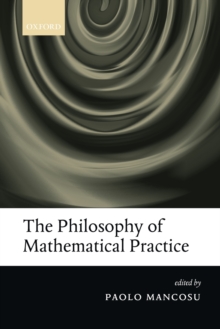 Contemporary philosophy of mathematics offers us an embarrassment of riches.

But anyone familiar with contemporary philosophy of mathematics will be aware of the need for new approaches that pay closer attention to mathematicalpractice.

This book is the first attempt to give a coherent and unified presentation of this new wave of work in philosophy of mathematics.

The new approach is innovative at least in two ways.

First, it holds that there are important novel characteristics of contemporary mathematics that are just asworthy of philosophical attention as the distinction between constructive and non-constructive mathematics at the time of the foundational debates.

Secondly, it holds that many topics which escape purely formal logical treatment-such as visualization, explanation, and understanding-can nonetheless be subjected to philosophical analysis.

The Philosophy of Mathematical Practice comprises an introduction by the editor and eight chapters written by some of the leading scholars in the field.

Each chapter consists of a short introduction to the general topic of the chapter followed by a longer research article in the area.