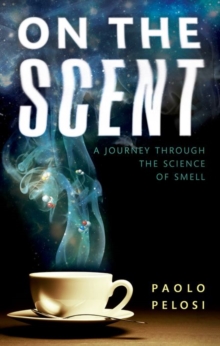 On the Scent : A journey through the science of smell Hardback

In humans, the perception of odours adds a fourth dimension to life, from the scent of flowers, the aroma of foods, and all the subtle smells in the environment.

But how many types of odours can we distinguish? Why do we like the food we like? Which are the most powerful odorants, and how well does the human sense of smell perform compared with that of a dog or a butterfly?

The sense of smell is highly complex, and such complexity discouraged scientists for a long time, leaving the world of smell in an atmosphere of mystery.

Only recently, thanks to the new tools furnished by molecular biology and neuroscience, are we beginning to answer these questions, uncovering the hidden secrets of our sense of smell, and decoding the language used by most animals to communicate.

In this book, Paolo Pelosi, one of the leading figures in the development of the science ofolfaction, recounts how the chemical alphabet behind smell has been pieced together over the past three decades.

Drawing on anecdotes from his own scientific career, and celebrating the rich variety of smells from herbs to flowers to roast coffee and freshly baked bread, he weaves together an engaging andremarkable account of the science behind the most elusive of our senses.