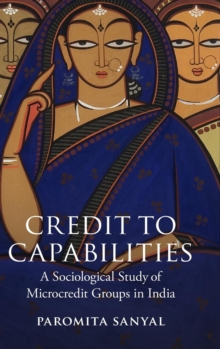 Credit to Capabilities : A Sociological Study of Microcredit Groups in India Hardback

Credit to Capabilities focuses on the controversial topic of microcredit's impact on women's empowerment and, especially, on the neglected question of how microcredit transforms women's agency.

Based on interviews with hundreds of economically and socially vulnerable women from peasant households, this book highlights the role of the associational mechanism - forming women into groups that are embedded in a vast network and providing the opportunity for face-to-face participation in group meetings - in improving women's capabilities.

This book reveals the role of microcredit groups in fostering women's social capital, particularly their capacity of organizing collective action for public goods and for protecting women's welfare.

It argues that, in the Indian context, microcredit groups are becoming increasingly important in rural civil societies.