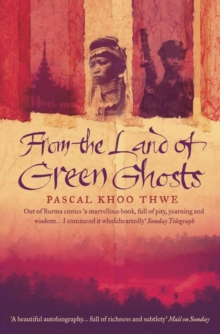 From The Land of Green Ghosts : A Burmese Odyssey Paperback / softback

The astonishing story of a young man's upbringing in a remote tribal village in Burma and his journey from his strife-torn country to the tranquil quads of Cambridge. In lyrical prose, Pascal Khoo Thwe describes his childhood as a member of the Padaung hill tribe, where ancestor worship and communion with spirits blended with the tribe's recent conversion to Christianity.

In the 1930s, Pascal's grandfather captured an Italian Jesuit, mistaking him for a giant or a wild beast; the Jesuit in turn converted the tribe. (The Padaung are famous for their `giraffe women' - so-called because their necks are ritually elongated with ornamental copper rings.

Pascal's grandmother had been exhibited in a touring circus in England as a `freak'.) Pascal developed a love of the English language through listening to the BBC World Service, and it was while working as a waiter in Mandalay to pay for his studies that he met the Cambridge don John Casey, who was to prove his saviour.

The brutal military regime of Ne Win cracked down on `dissidents' in the late 1980s. Pascal's girlfriend was raped and murdered by soldiers, and Pascal took to the jungle with a guerrilla army.

How he was eventually rescued with Casey's help is a dramatic story, which ends with his admission to Cambridge to study his great love, English literature.