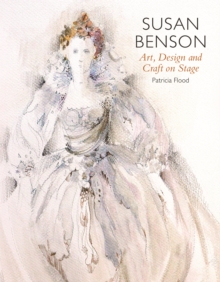 A compelling exploration of the career of one of theatre's most outstanding theatrical designers.

This book is a detailed and lavishly illustrated look at the work and career of the renowned stage and costume designer Susan Benson, whose work has been seen on some of the world's most influential stages but is most identified with the Stratford (Ontario) Festival.

Featured throughout the book are gorgeous full- page photographs from both the live stage and the production process.

Behind the scenes commentary reveals the challenges and exhilaration of mounting alarge stage production while Benson's working design sketches reveal the artistic process and the remarkable range of her talent.

The first part of the book focuses on Benson's early, formative work, influenced by her youth in a theatrical family.

The second part concerns her theory of set, costume and prop design, and her problem-solving methodology for approaching a show.

This is followed by a third section on the "craft" of building shows: how art, design and craft transform the theatrical work on paper to the imagined world that the audience sees - costume fitting, prop building and collaborating with the amazing artists that bring her designs to life.

The book closes with an in-depth look at Benson's most significant productions: Robin Phillips' 1976 Stratford (Ontario) Festival production of A Midsummer Night's Dream with Jessica Tandy and Jeremy Brett, remounted in 1977 with Maggie Smith; in 1979, the Trojan War play The Woman starring Martha Henry; and the celebrated Brian Macdonald productions of Gilbert and Sullivan's The Mikado, The Gondoliers and Iolanthe.

In addition to Benson's work at the Stratford (Ontario) Festival, the book looks at designs for many other theatres across Canada and the U.S., including Romeo and Juliet for the National Ballet of Canadaand Madama Butterfly and The Golden Ass for the Canadian Opera Company.

Susan Benson's long and illustrious career earned her great respect from her peers, much adulation and numerous awards.

Today, she turns her visual artistry to painting, which has also brought her much success.

Susan Benson: Art, Design and Craft on Stage is a revealing, informative and thorough examination of a life of creative brilliance.

It will appeal to all readers with a love for theatre, both front of house and backstage.