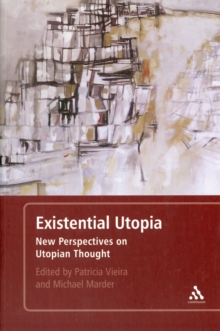 These original essays contributed by leading thinkers aim to revitalize utopian thinking and apply it to contemporary national and international politics.

Radical political thought of the 20th century was dominated by utopia, but the failure of communism in Eastern Europe and its disavowal in China has brought on the need for a new model of utopian thought.

This book thus seeks to redefine the concept of utopia and bring it to bear on today's politics.

The original essays, contributed by key thinkers such as Gianni Vattimo and Jean-Luc Nancy, highlight the connection between utopian theory and practice.

The book reassesses the legacy of utopia and conceptualizes alternatives to the neo-liberal, technocratic regimes prevalent in today's world.

It argues that only utopia in its existential sense, grounded in the lived time and space of politics, can distance itself from mainstream ideology and not be at the service of technocratic regimes, while paying attention to the material conditions of human life. "Existential Utopia" offers a new and exciting interpretation of utopia in contemporary culture and a much-needed intervention into the philosophical and political discussion of utopian thinking that is both accessible to students and comprehensive.