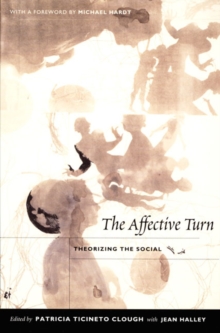 "The innovative essays in this volume . . . demonstrat[e] the potential of the perspective of the affects in a wide range of fields and with a variety of methodological approaches.

Some of the essays . . . use fieldwork to investigate the functions of affects-among organized sex workers, health care workers, and in the modeling industry.

Others employ the discourses of microbiology, thermodynamics, information sciences, and cinema studies to rethink the body and the affects in terms of technology.

Still others explore the affects of trauma in the context of immigration and war. And throughout all the essays run serious theoretical reflections on the powers of the affects and the political possibilities they pose for research and practice."-Michael Hardt, from the forewordIn the mid-1990s, scholars turned their attention toward the ways that ongoing political, economic, and cultural transformations were changing the realm of the social, specifically that aspect of it described by the notion of affect: pre-individual bodily forces, linked to autonomic responses, which augment or diminish a body's capacity to act or engage with others.

This "affective turn" and the new configurations of bodies, technology, and matter that it reveals, is the subject of this collection of essays.

Scholars based in sociology, cultural studies, science studies, and women's studies illuminate the movement in thought from a psychoanalytically informed criticism of subject identity, representation, and trauma to an engagement with information and affect; from a privileging of the organic body to an exploration of nonorganic life; and from the presumption of equilibrium-seeking closed systems to an engagement with the complexity of open systems under far-from-equilibrium conditions.