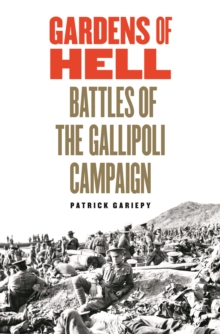 Gardens of Hell : Battles of the Gallipoli Campaign, 1915-1916 Hardback

One of the most tragic follies of modern warfare was the Gallipoli Campaign of the First World War.

After eleven months of crushing losses, Allied soldiers were forced to evacuate, their mission deemed hopeless. Indeed it had been hopeless from the start. In the eleven months of this doomed campaign, 42,000 British and Dominion servicemen lost their lives; an additional 20,000 Frenchmen were killed, and 65,000 Turks died defending their country.

In Gardens of Hell: Battles of the Gallipoli Campaign, 1915-16, Patrick Gariepy shares the human side of the campaign, told in the men's own words.

Collected from diaries and letters and from the stories that were passed down through families over the generations, these firsthand accounts provide heartfelt-if unpleasant-testimony of a hopeless campaign fought by men beholden to a series of political alliances that few knew anything about.

Such an approach offers not the story of battles as seen from the generals'or politicians' points of view, but the poignant firsthand accounts of the fury, terror, and grief experienced by the men who fought those battles.

Gardens of Hell is a sensitive acknowledgement of the enormous human cost of military folly and failure.