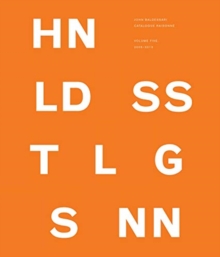 The fifth volume of the John Baldessari Catalogue Raisonne compiles the approximately 367 works made by the influential American conceptual artist (b. 1931) from 2005 through 2010. During these years, the artist undertook a number of series, including the shaped erasures of "Blockage"; the word-and-image juxtapositions of "Prima Facie"; the explorations of the face in "Nose and Ears, Etc." and "Raised Eyebrows/Furrowed Foreheads"; and the muted, spare "Sediment" works on canvas. Catalogue entries allow readers to trace the shifts and developments in Baldessari's work during these years, a time of continued experimentation and aesthetic distillation that is further explored in a conversation between Baldessari and fellow artist David Salle.

A critical essay by Hannah B. Higgins provides a close reading of selected works and gives a historical context for understanding Baldessari's art from this period.