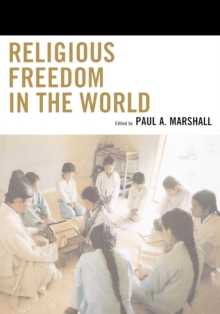 Edited by Paul A. Marshall

Religious Freedom in the World profiles 101 countries and territories, which between them contain more than 95 percent of the world's population, and uses a clearly comprehensible numeric scale to rank the level of religious freedom found in each.

The countries have been selected so that the survey represents each continent, major religion, and geographic area; covers countries with large populations; describes particularly egregious violators of religious freedom; and adequately illustrates variations within regions. The survey is not a catalog of the rights of 'religious people.' The persecution of all people of any or no religion should be equally as offensive in our eyes as that of believers in any particular religion.

Furthermore, since most people in the world profess to be believers of one kind or another, then such a survey would necessarily include most of the world's human rights violations of whatever kind.

Rather, the focus is on the denial to anyone of rights of a particular kind, those connected with practicing one's religion, and the denial of rights for a particular reason, because of the religious beliefs of those who are persecuted and/or those who persecute. Finally, in line with most human rights treaties, this survey covers freedom of 'religion or belief.' There are beliefs that, functionally, take the place of explicitly religious beliefs, and these, too, should be protected.

Atheists and agnostics may also suffer loss of freedom of 'religion or belief' and, in turn, may deny such freedom to others.