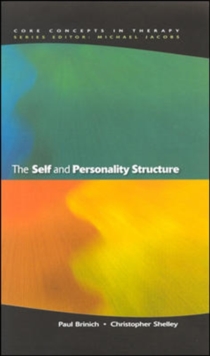 The Self And Personality Structure Paperback / softback

* What is the self and its relationship to personality theories?* How do the central schools of psychotherapy conceptualize the self?The self is a notoriously difficult and at times obscure concept that underpins and guides much psychotherapy theory and practice.

The corollary concept of personality is fundamentally linked to the concept of the self and has provided theorists and researchers in psychology with a more coherent set of principles with which to explicate the personal and attributional aspects of the self.

The authors come from two quite separate schools of depth psychology (psychoanalytic and Adlerian) and provide an overview of the self and how it is conceptualized across the psychotherapies within various theories of personality.

In addition to outlining some of the philosophical and historical issues surrounding the notion of selfhood, the authors examine classical and developmental models of psychoanalytic thought that implicitly point to the idea of self.

The authors also outline Kohut's psychoanalytic self psychology in addition to Adlerian and other post Freudian, Jungian and post-Jungian, cognitive, humanistic, and existential contributions to the self and personality structure.