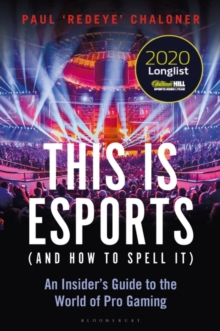 This is esports (and How to Spell it) : An Insider's Guide to the World of Pro Gaming Paperback / softback

'You need this. Trust me, buy it now.' - Weekly GG'a triumph... a must-read for newcomers and veterans alike' - ForbesAward-winning broadcaster Paul 'Redeye' Chaloner brings us the definitive book on esports, the fastest growing entertainment phenomenon in the world today. From slapping coins down on arcade cabinets to the lights of Madison Square Garden, competitive video gaming has come a long way.

Today, esports is a billion-dollar industry, the best players becoming stars in their own right, battling for eight-figure prizes in front of a global audience of tens of millions.

From Call of Duty to Counter-Strike, FIFA to Fortnite, a generation of players have turned multiplayer video games from a pastime into a profession.

But there are questions. How did we get here? What exactly is competitive gaming - is it a sport? How much money do the top stars make? Do you really have to retire at 23? And just what the hell is Dota? This is esports (and How to Spell it) addresses all of this and more, as award-winning broadcaster Paul 'Redeye' Chaloner takes you inside the unstoppable rise of pro gaming to reveal the bitter rivalries, scandals and untold history of esports, from origins to sold-out arenas.

With his trademark wit - and unrivalled access - Paul delivers the definitive book on the fastest-growing entertainment phenomenon in the world today. 'Paul Chaloner is a living legend in the esports space.' - Jason Lake, founder and CEO of the esports team Complexity Gaming'Terrific stories and insights from the inside.' - T.L.