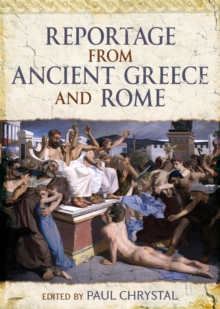 A fascinating and truly unique survey of two of the world's most significant and influential civilisations spanning some 2000 years from the development of the Greek alphabet to the sack of Rome and a dinner date with Attila the Hun in 450 CE.

Some ninety Greeks and Romans have contributed to the book with reports culled from 130 separate works.

In addition to literary sources--history, letters, poetry, drama, science, medicine, philosophy--the book also mines epigraphy, graffiti, archaeology and the visual arts to give as rounded a reportage as possible. 'Modern' contributions come from the Bamboo Annals, Shakespeare, Raleigh, Browning, Heine, Houseman, Orwell, the Ventris Papers and from the excavations at Pompeii, Vindolanda and the London Bloomberg site.