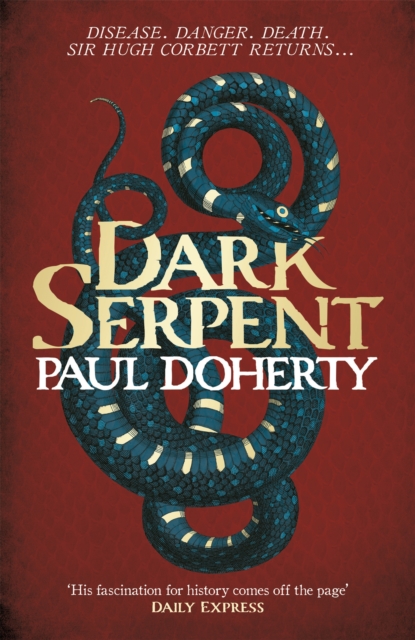 It is the Summer of 1311 and Hugh Corbett is about to take up a life of danger again in the eighteenth novel in his series, DARK SERPENT, the follow up to THE MYSTERIUM.

If you love historical mysteries from Robin Hobb, Susanna Gregory, Michael Jecks, Peter Tremayne and Bernard Knight you will love this. After his recent unveiling of a devious assassin, Sir Hugh Corbett has returned to service as the Keeper of the Secret Seal, begrudgingly admitting that his appetite for adventure has once again been whetted.

Summoned to meet the King to be congratulated on their work together, Corbett and Ranulf learn of the death of Corbett's close friend, Ralph Grandison.

Ralph, a leper, has been found dead in a rowing boat, a dagger thrust through his chest.

But this murder is not the first of its kind. Other patients of the hospital in which Ralph was staying have similarly slaughtered and it seems as though the lepers, all former knights of the Royal household, are being targeted. The discovery that Ralph was killed by no ordinary weapon, but a poison dagger that once belonged with the Crown Jewels before being famously stolen, leads Corbett down a complex path, where the risk of disease plays out against the backdrop of finding an assassin who will use any means necessary to kill.

As Corbett puts himself in the path of extreme danger, will he survive to see another day?