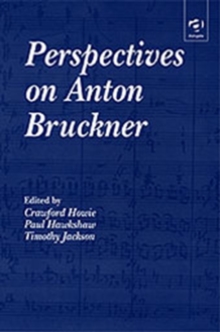 A century after his death Anton Bruckner still remains one of the most complex and enigmatic creative personalities of the nineteenth century.

A leading avant-garde figure of his generation, he was an accomplished performer and teacher in addition to being a great composer; few people in the history of western music can boast his level of achievement in all these areas combined. This book, a collection of essays written by an international group of scholars, offers diverse theoretical and musicological perspectives on Bruckner the composer-teacher-performer.

Facets of his formidable theoretical training and his application of it as part of the compositional process are explored.

A variety of analytical methodologies is used to examine the Second through to the Ninth Symphonies, the heart of the composer's mature repertoire.

Finally, aspects of Bruckner's career as a teacher and performer, his complex personality, his influence and dissemination of his music are considered.