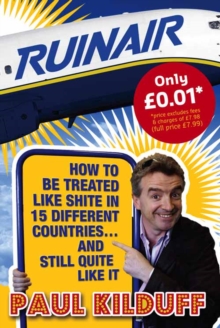 How to be treated like shite in 15 different countries...and still quite like it! Stung by a ten-hour delay and a not-so-bargain fare to Spain on his native 'low fares' airline, Dubliner Paul Kilduff plots revenge.

Can Paul beat 'Ruinair' at their low cost game and fly to all fifteen countries in Western Europe for less than the EURO300 it cost him to be stranded in an airport lounge surrounded by drunks, bimbos and incompetents (and that was just the flight crew!)? Suffering every low-fares airline indignity: a miniscule carry-on baggage allowance, 6.00 am departures, Six Nations-style boarding scrums, epic bus excursions and terminal anxiety, Paul is doing something he's never done before: travelling to places he never knew he wanted to go, which are probably not quite where he thinks they are, with no idea what he's going to do when he gets there. In a way never before possible Ruinair and its competitors have opened up Europe's treasures to the average traveller, and, as discovered by Paul, a few complete dumps too.

In this hilarious, no-holds-barred account of a holiday of a lifetime-cum-human endurance test, Paul takes us on an adventure that is not for the faint-hearted.

From Luxembourg to Liechtenstein to Spain and back again, pack your bags (maximum 10kg, please) and join Paul Kilduff on this is a whirlwind no-frills tour of Europe and the low-cost airlines that help make that colourful continent a smaller, and somewhat angrier, place. 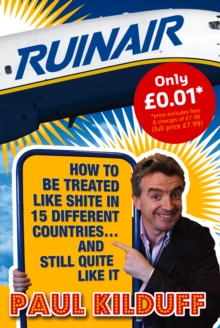