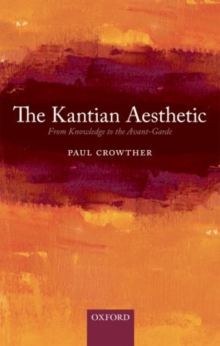 The Kantian Aesthetic : From Knowledge to the Avant-Garde Paperback / softback

The Kantian Aesthetic explains the kind of perceptual knowledge involved in aesthetic judgments.

It does so by linking Kant's aesthetics to a critically upgraded account of his theory of knowledge.

This upgraded theory emphasizes those conceptual and imaginative structures which Kant terms, respectively, 'categories' and 'schemata'.

By describing examples of aesthetic judgment, it is shown that these judgments must involve categories and fundamental schemata(even though Kant himself, and most commentators after him, have not fully appreciated the fact).

It is argued, in turn, that this shows the aesthetic to be not just one kind of pleasurable experience amongst others, but one based on factors necessary to objective knowledge and personal identity, and which,indeed, itself plays a role in how these capacities develop. In order to explain how individual aesthetic judgments are justified, and the aesthetic basis of art, however, the Kantian position just outlined has to be developed further.

This is done by exploring some of his other ideas concerning how critical comparisons inform our cultivation of taste, and art's relation to genius.

By linking the points made earlier to a more developed account of this horizon of critical comparisons, a Kantian approach can be shown to be both a satisfying andcomprehensive explanation of the cognitive basis of aesthetic experiences.

It is shown also that the approach can even cover some of the kinds of avant-garde works which were thought previously to limit its relevance.