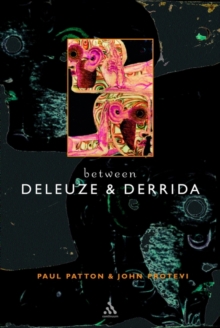 Between Deleuze and Derrida Paperback / softback

Gilles Deleuze and Jacques Derrida are the two leading philosophers of French post-structuralism.

Both theorists have been widely studied but very little has been done to examine the relation between them.

Between Deleuze and Derrida is the first book to explore and compares their work.

This is done via a number of key themes, including the philosophy of difference, language, memory, time, event, and love, as well as relating these themes to their respective approaches to Philosophy, Literature, Politics and Mathematics.