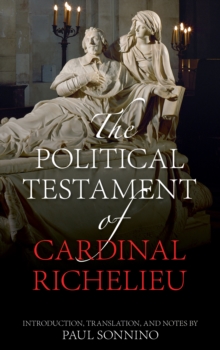 The Political Testament of Cardinal Richelieu ranks with the confessions of Saint Augustine and Jean-Jacques Rousseau as one of the most revealing expressions of an individual's sense of identity in all literature.

Leading scholar Paul Sonnino has now filled an essential gap with the first comprehensive translation of one of the most famous works on early modern statecraft. This unique volume is the only edition in any language based on a comparison not only of all the known manuscripts but also of some that are virtually unknown, clearly distinguishing between the two principal revisions; and the first to include the sequel-the "Succinct Narration"-which has been almost entirely overlooked in past analysis of the work as a whole.

It is thoroughly annotated with detailed notes that describe the characters and events, providing readers with the history of the period.

Sonnino's clear and incisive introduction demonstrates how a brilliant and practical seventeenth-century statesman could explain his service to an eccentric king, his merciless ministry, and his alliances with Protestants before a God who was an integral part of his belief system.

The result is a fundamental treatise about the state, power, and political intelligence from an iconic figure at the conjunction of political practice and political theory.