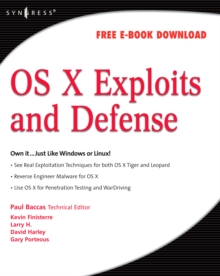 OS X Exploits and Defense : Own it...Just Like Windows or Linux! Paperback / softback

Contrary to popular belief, there has never been any shortage of Macintosh-related security issues.

OS9 had issues that warranted attention. However, due to both ignorance and a lack of research, many of these issues never saw the light of day.

No solid techniques were published for executing arbitrary code on OS9, and there are no notable legacy Macintosh exploits.

Due to the combined lack of obvious vulnerabilities and accompanying exploits, Macintosh appeared to be a solid platform.

Threats to Macintosh's OS X operating system are increasing in sophistication and number.

Whether it is the exploitation of an increasing number of holes, use of rootkits for post-compromise concealment or disturbed denial of service, knowing why the system is vulnerable and understanding how to defend it is critical to computer security. Macintosh OS X Boot Process and Forensic Software All the power, all the tools, and all the geekery of Linux is present in Mac OS X.

Shell scripts, X11 apps, processes, kernel extensions...it's a UNIX platform....Now, you can master the boot process, and Macintosh forensic softwareLook Back Before the Flood and Forward Through the 21st Century Threatscape Back in the day, a misunderstanding of Macintosh security was more or less industry-wide.

Neither the administrators nor the attackers knew much about the platform.

Learn from Kevin Finisterre how and why that has all changed!Malicious Macs: Malware and the Mac As OS X moves further from desktops, laptops, and servers into the world of consumer technology (iPhones, iPods, and so on), what are the implications for the further spread of malware and other security breaches?

Find out from David HarleyMalware Detection and the Mac Understand why the continuing insistence of vociferous Mac zealots that it "can't happen here" is likely to aid OS X exploitationgMac OS X for Pen Testers With its BSD roots, super-slick graphical interface, and near-bulletproof reliability, Apple's Mac OS X provides a great platform for pen testingWarDriving and Wireless Penetration Testing with OS X Configure and utilize the KisMAC WLAN discovery tool to WarDrive.

Next, use the information obtained during a WarDrive, to successfully penetrate a customer's wireless networkLeopard and Tiger Evasion Follow Larry Hernandez through exploitation techniques, tricks, and features of both OS X Tiger and Leopard, using real-world scenarios for explaining and demonstrating the concepts behind themEncryption Technologies and OS X Apple has come a long way from the bleak days of OS9.

THere is now a wide array of encryption choices within Mac OS X.

Let Gareth Poreus show you what they are.