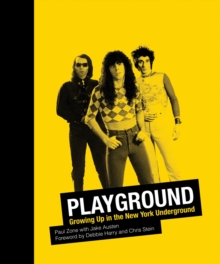 Playground : Growing Up in the New York Underground Hardback

Fans of punk rock and New Wave music will be impressed by this collection of never-before-seen images.

The first-time release of this private photo collection, Zone's photo memoir will give new insight into what some might see as a saturated field, proving that underground rock royalty will never grow old.

This book is the chronicle of a 14-year-old boy through his teens; so he was invisible to the people he was photographing, giving him an extra boost in terms of taking candid photographs.

Fans of Blondie will flock to this insider's guide to the era.

Inspirational volume of D.I.Y. style that appeals to youth and adults around the world, even more culturally relevant in the face of an ever-changing New York. While most teenagers daydreamed of summer break while playing rock 'n' roll in their bedrooms, fourteen-year-old Paul Zone danced away his youth in underground clubs with those very same rock stars, exploring the concrete playground with actors, drag queens, and drug addicts.

The mid-1970s was a time when the death of glam and the birth of punk rock collided in a celebration of glitter and grunge, and Zone had a front-row seat to it all.

In this incredible photo memoir, Zone shares personal images that have never been released to the public alongside memories of the era, all through the eyes of a youngster whose reverential regard to his subjects made him a regular fixture in the lives of these greats.

Zone captures the joys and the fantasy of the New York underground with a genuine intimacy, making this volume a worthy tribute to the legends of underground rock royalty.