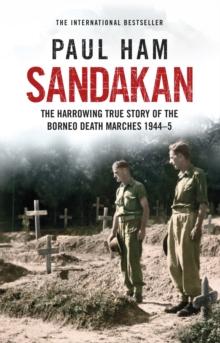 After the fall of Singapore in 1942, the conquering Japanese Army transferred some 2500 British and Australian prisoners to a jungle camp on the north-eastern coast of Borneo: Sandakan. There they were beaten, broken, worked to death, thrown into bamboo cages on the slightest pretext and subjected to tortures so ingenious and hideous that the victims were driven to the brink of madness.

But this was only the beginning. In late 1944, Allied aircraft began bombing the coastal towns of Sandakan and Jesselton, and the Japanese resolved to abandon the prison camp and move the prisoners 250 miles inland.

The journey there became known as the Sandakan Death marches.

More than a thousand prisoners set out on the epic marches.

Only six survived. This is the story of the survivors and the fallen.