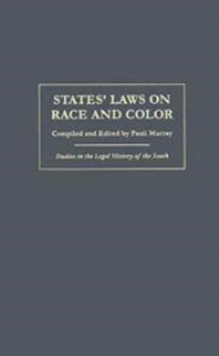 This remarkable, hard-to-find resource is an exhaustive compilation of state laws and local ordinances in effect in 1950 that mandated racial segregation and of pre-Brown-era civil rights legislation.The volume cites legislation from forty-eight states and the District of Columbia, and ordinances of twenty-four major cities across the country.

The complete text of each law or ordinance is included, along with occasional notes about its history and the extent to which it was enforced.Other relevant information found in the volume ranges widely: the texts of various Supreme Court rulings; international documents; federal government executive orders, departmental rules, regulations, and directives; legislation related to aliens and Native Americans; and more.In his introduction Davison M.

Douglas comments on the legislation compiled in the book and its relevance to scholars today and also provides biographical background on Pauli Murray, the attorney who was the volume's original editor.