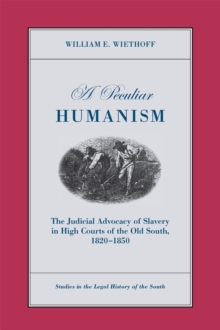 Peculiar Humanism : The Judicial Advocacy of Slavery in High Courts of the Old South 1820-1850 Paperback / softback

In early-nineteenth-century America, and especially in the Old South, the use of oratory appealed to legal professionals-judges as well as advocates.

Consistent with the humanism proclaimed in classical and neoclassical works, appellate judges perceived their civic duties to demand oratorical skill as well as legal expertise.

In A Peculiar Humanism, William E. Wiethoff assesses the judicial use of oratory in reviewing slave cases and the struggle to fashion a humanist jurisprudence on slavery despite the customary restraints placed on judicial advocacy. Drawing attention to a neglected intersection of law and letters, Wiethoff analyzes the proslavery discourse embedded in antebellum judicial opinions by examining the public addresses, judicial narratives, and private papers of sixty-nine appellate judges.

By contrasting the judges' proslavery appeals in a variety of cases in the upper and deep South, Wiethoff shows how context shaped the judges' perceptions, priorities, and arguments.

An outstanding contribution to the literature on law and slavery, A Peculiar Humanism testifies to the character of the legal profession in the Old South and serves as an index of the beliefs and attitudes that coexisted with legal decision making.