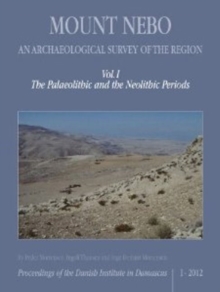 Mount Nebo -- An Archaeological Survey of the Region : The Palaeolithic & the Neolithic Periods Volume I Hardback

During six seasons (1992-1998) an intensive survey of the Mount Nebo region was accomplished under the auspices of the Franciscan Archaeological Institute at Mount Nebo and the Danish Palestine Foundation.

It was followed by a brief reconnaissance in 2008. The survey was centered around Siyagha, covering an area of approximately 35 square kilometres.

This volume is dedicated to the description of 79 locations and single finds, which can be attributed to the Stone Age.

In the presentation the material has been divided into four chronological groupings, covering the Lower, Middle, Upper-Epipalaeolithic, and the Neolithic periods based on diagnostic artifacts, such as for example Acheulean handaxes, Levallois- and Mousterian points, Neolithic arrowheads, bipolar blade cores, and pottery.