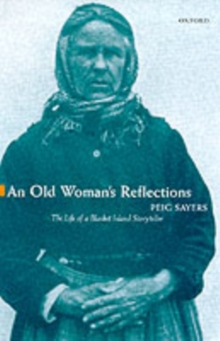 Storytelling kept alive the myths, legends and history of the Blasket Islands. In her old age, Peig Sayers, recounted her life to her son who recorded the tale in this book. She recalls the events of her life and her simple philosophy in a moving poetic style.

Such everyday tasks as collecting turf for roots, catching and eating seals, and preparing for a wake are depicted alongside such momentous events as drownings at sea, pilgrimages, and the spread of the newsof the Easter uprising in 1916. There were 'clouds of sorrow', but helping to lift them was the friendship she found in the community, which 'was like a little rose in the wilderness'.

The Blasket Islands are three miles off Irelands Dingle Peninsula. Until their evacuation just after the Second World War, the lives of the 150 or so Blasket Islanders had remained unchanged for centuries. A rich oral tradition of story-telling, poetry, and folktales kept alive the legends and history of the islands, and has made their literature famous throughout the world. The 7 Blasket Island books published by OUP contain memoirs and reminiscences from within this literary tradition,evoking a way of life which has now vanished.