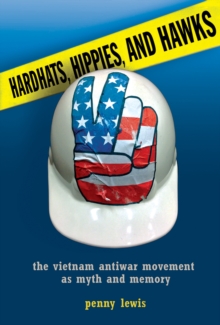 by Penny (CUNY SCHOOL OF LABOR AND URBAN STUDIES) Lewis

In the popular imagination, opposition to the Vietnam War was driven largely by college students and elite intellectuals, while supposedly reactionary blue-collar workers largely supported the war effort.

Through close readings of archival documents, popular culture, and media accounts at the time, she offers a more accurate "counter-memory" of a diverse, cross-class opposition to the war in Southeast Asia that included the labor movement, working-class students, soldiers and veterans, and Black Power, civil rights, and Chicano activists.Lewis investigates why the image of antiwar class division gained such traction at the time and has maintained such a hold on popular memory since.

Identifying the primarily middle-class culture of the early antiwar movement, she traces how the class interests of its first organizers were reflected in its subsequent forms.

The founding narratives of class-based political behavior, Lewis shows, were amplified in the late 1960s and early 1970s because the working class, in particular, lacked a voice in the public sphere, a problem that only increased in the subsequent period, even as working-class opposition to the war grew.

By exposing as false the popular image of conservative workers and liberal elites separated by an unbridgeable gulf, Lewis suggests that shared political attitudes and actions are, in fact, possible between these two groups.