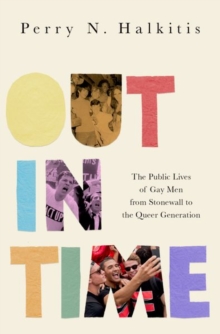 Out in Time : The Public Lives of Gay Men from Stonewall to the Queer Generation Hardback

The civil rights of LGBTQ people have slowly yet steadily strengthened since the Stonewall Riots of June, 1969.

Despite enormous opposition from some political segments and the catastrophic effects of the AIDS crisis, the last five decades have seen continual improvement in the conditions of the lives of LGBTQ individuals in the United States.

Out in Time explores the life experiences of three generations of gay men - the Stonewall, AIDS, Queer generations - arguing that while there are generational differences in the lived experiences of young gay men, and each one confronts its own unique historical events, realities, and socio-political conditions, there are consistencies across time that define and unify the identity formation of gay men.

Guided by the vast research literature on gay identity formation and coming out,the ideas and themes explored here are seen through the oral histories of a diverse set of fifteen gay men, five from each generation.