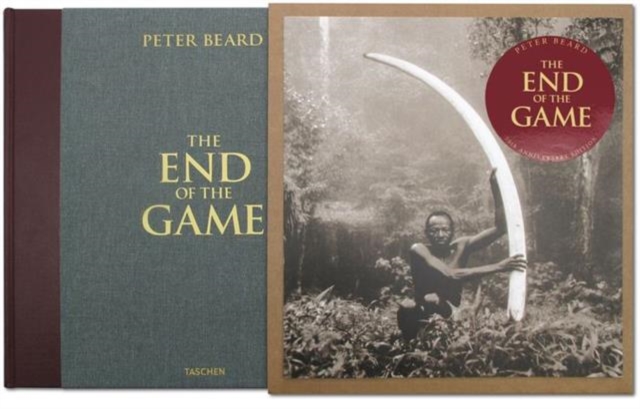 "The deeper the white man went into Africa, the faster the life flowed out of it, off the plains and out of the bush...vanishing in acres of trophies and hides and carcasses." - Peter BeardA landmark publication on Africa, The End of the Game combines Peter Beard's salient text and remarkable photographs to document the overpopulation and starvation of tens of thousands of elephants, rhinos, and hippos in Kenya's Tsavo lowlands and Uganda parklands in the 1960s and '70s. Researched and compiled over two decades, Beard's work is a powerful and poignant testimony to the damage done by human intervention in Africa.

His own images and texts are supplemented by historical photographs of, and writings from, the enterprisers, explorers, missionaries, and big-game hunters whose quest for adventure and "progress" were to change the face of a continent: Theodore Roosevelt, Frederick Courteney Selous, Karen Blixen (Isak Dinesen), Philip Percival, J.A.

Hunter, Ernest Hemingway, and J.H. Patterson. Marking the 50th anniversary of its first publication, TASCHEN now republishes The End of the Game in a limited edition of 5,000 copies, with an updated foreword by internationally renowned travel and fiction writer Paul Theroux.

Touching on such themes as distance from nature, density and stress, and loss of common sense, this seminal portrait is as resonant today, amid growing environmental crises, as it was a half century ago.

Peter Beard. The End of the Game